A Network for Women Journalists Around the World: Coalition For Women In Journalism 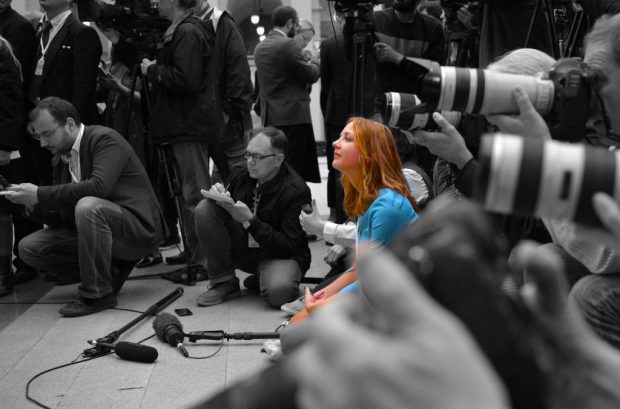 We Want To Change This Picture!

Kiran, can we get to know you first? What ideas made you establish such a platform?

I’m Kiran Nazish. I have been a journalist since 1999. I started journalism in Pakistan first. I noticed a huge inequality in the environment in which I worked. Women earned much lower wages than men, they were subjected to violence and harassment and there were women who internalized it. Then I went to the West and started working in the New York Times. I thought everything would be different there as the image of the west is different. But when I went to the New York Times, I saw the same thing. There was nothing different. Women were again subjected to violence and harassment. Women who have been working for 30-40 years were still working under unequal conditions. I worked there for 1.5 years. We contacted with many different institutions. We initially built this network as a small NGO. After Australia and New York, we opened offices in India, Pakistan, Afghanistan, Turkey, and Mexico. We also have negotiations with Germany and France and we started activating in Turkey in April. We took this step together with Kati Marton, a friend of mine who has been a journalist for 30 years.

Women suffer discrimination as well as violence. There is a very competitive environment to begin with. Those who are smaller and inexperienced are treated more brutally. You are already succumbing as a woman journalist. We made such an attempt because we wanted to change this picture.

So, did other institutions the large journalistic networks support you?

When we first started, we could not get help from big institutions in any way. People, including women, thought that no such thing was needed. In general, we prefer to work with local NGOs in the countries where we work. Because basically they have extensive knowledge of the region and we cooperate with them. We work with regional local partners.

What other problems do journalist women face around the world?

I am normally a very calm but not an aggressive person, but when I work in the field, I try to look much tougher because when you are like yourself or when you are soft, you face a reaction as if you’re a little girl in the field. That’s why female journalists must always be tough, aggressive and angry. We did a research in India, Afghanistan and Mexico. While we were doing this research, our expectation was that journalists in Mexico are in a much better situation according to India and Afghanistan; because at least they don’t have to wear Hijabs, or they can go out whenever they want. But we realized that they are exposed to violence at the same rate which is almost 60-70 percent, and they are harassed as well but the person they are exposed to differs. For example, female journalists can be subjected to violence directly by their editors or co-workers in Mexico, but they can be subjected to violence by anyone in Afghanistan or India. Or a politician is targeted by the society, meaning by everyone, through the militarist system. Similarly, the reactions of the abused group change. Women come together very quickly and gather in Mexico and look after each other. Some women in Afghanistan are trying to do this too, but in India, is not the case. It is very important for women journalists to come together, join each other and shoulder each other.
After building the platform, and after the violence and pressure I experienced at the workplace, I thought why we did not have an organization that supports us. This was my main source of motivation. However, violence is not only unique to the New York Times, all media organizations have it. Women are discriminated against. If you argue with the editor, if you don’t keep them happy, you cannot get promoted or cannot rank. It is not something that belongs to a certain geography, but it is a problem that women journalists experience everywhere.

We Want to Reveal the Experiences of Women Journalists

So what are your goals and your purposes, what are you doing at places where you are organized?

What we originally plan and carry out is a program called Mentorship. We bring journalists who are at the beginning or in the middle of their careers and journalists who have a long career together. Our goal is to gather women who can help each other and empower each other. In this way, we try to ensure that female journalists working for 4-5 years stay in the profession. Because women have to move away from the profession after 4-5 years because of social pressures and roles. There is an inadequate situation which creates a break in reluctance and enthusiasm. We have this program to keep these women in the profession and keep them together. We are trying to spread this program to a more comprehensive area, and we care it about very much.

Our second program is Advocacy. We record assaults such as physical attacks, harassment, psychological or verbal threats, trolling on internet and social media against women journalists which are among our reasons for establishment and which we are trying to develop further. For this, we have a system on our website, that is a button to report harassment. Here all female journalists fill in a form and write they experience. We keep the name of the identity and media organization secret if they ask for it, but we keep records of them, and at the end of the year, we want to reveal the situation that “there are so many journalists in this country and the number of woman journalists suffer from discrimination and violence is X”. We publish press releases and newsletters about them, and at the end of the year we share this data. Thus, we want to reveal the experiences of women journalists.

Women journalists have to deal with their own professions as well as their families, inequalities, competition or harassment in the workplace. So what we are trying to do is to make women journalists work equally and safely, and to ease their workload.

So why did you want to open an Office in Turkey?

Turkey is a very dynamic country, its a country that is not safe especially for women journalists and which has difficult conditions. In addition, its the country with the most women imprisoned journalists. It was very important that we open an office in such a country.
Imprisoned women journalists in Turkey are what we would call our first priority. We have started campaigns on this and we started making a documentary about women journalists who have just been released from prison. We are also trying to hold a symposium where these women talk about their traumas, how they got over it or not. Women journalists in prison are one of the main problems of Turkey, so this is our first job. We are also trying to negotiate with the government and the main opposition so that something can be done with the law and the judiciary.

In Turkey, foreign press and foreign NGOs are generally seen as outsiders and enemies and even agents. Have you encountered something like this?

For now, we have not encountered such a thing in Turkey yet, but this is what happens to us all over the world, especially in Asia and the Middle East. You are considered as “agents, enemies, outsiders”. But we do our work transparently as much as possible to prove that we are not. We also try to do everything officially. We are an official organization and all we work with are female journalists.

You may be interested in: What Does Women Journalists Encounter? (Kadın Gazeteciler Neler Yaşıyor?)