Climate Media in Turkey (1) – ‘Broadcasting All Issues Through a Green Lens: Yeşil Gazete’ 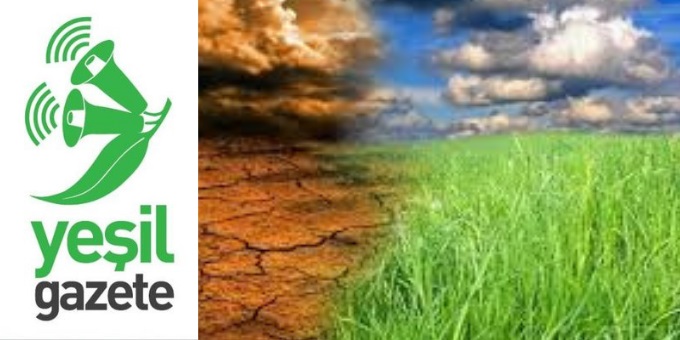 The increasing frequency of disasters in Turkey has increased the interest in the climate crisis, but the number of media producing content in the field of climate and climate journalism is still low. Yeşil Gazete (Green Newspaper) is the first guest of the file named 'Climate Media in Turkey', in which we discuss the situation of the media on climate and the impact of journalism in this field on the public. The editor of the newspaper, Elif Ünal, said that they aim to fill the gaps that the mainstream media in Turkey cannot fill, by looking at all issues that concern society, including the climate crisis, through a green lens.

Defining itself as an ‘ecological, political, participatory and festive internet newspaper’, Yeşil Gazete creates daily content with a global perspective, focusing on ecology and climate issues, it is constantly updated during the day with breaking news, new news and comments. We talked with Elif Ünal, one of the editors of Yeşil Gazete, about the issue of climate and climate journalism in the media.

How does the Yeşil Gazete define itself? How would you describe your mission?

As Yeşil Gazete, we define ourselves as an independent and alternative media platform. We aim to fill the gaps that the mainstream media in Turkey cannot fill, with our news, which is fed and strengthened by the local, and at the same time, we look at the problems from a global perspective.

As a daily internet newspaper with active, dynamic and special news, commentary and audio/visual content production, we appeal not to a small ecology and climate movement, but to a much wider audience and we are followed by these people.

‘We create contents not only about the climate, but also contents related to all the topics intertwined with the climate’

What makes Yeşil Gazete different from other media that creates content in the field of climate?

As Yeşil Gazete, we see the issue of climate crisis intertwined not only with the subject’s itself, but also with the problems we face in society today in many fields such as economy, politics, health, LGBTI+, women and education. As a result, we create content not only directly on the issues in the field of climate, but also on all these intertwined issues. We touch on all issues that concern society through a ‘green’ lens.

Although our sensitivity to ecology and climate is known by the general public, our view of these issues within the scope of democratic rights and freedoms, in addition to these sensitivities, we believe that our holistic approach to issues such as general democratization, animal rights, freedom of speech, and gender equality increases our effectiveness in environmental and ecology issues.

‘Barriers to freedom of the press and lack of incentives prevent the establishment of media outlets that create sufficient quality content about climate in Turkey.’

Are there enough media outlets in Turkey that specialize in the field of climate or create content on climate?

The climate crisis is one of the greatest threats facing humanity. As such, it is difficult to say that climate change has received the value it deserves, both in the mainstream media and in other alternative platforms. It is not like this only in Turkey, it is same all over the world. However, in addition, barriers to freedom of the press and lack of incentives prevent the establishment of media outlets that create sufficient quality content about the climate in Turkey.

Can reporting and creating content in the field of climate be considered as ‘solution journalism’?

Climate journalism and solution journalism are two fields of journalism that require experience and knowledge on their own. But they both have a lot to learn from each other, and together they make for much more compelling and moving news.

For example, in climate journalism, it is quite possible to describe the flood disaster in Artvin, to establish the connection between the increase in the intensity of precipitation and greenhouse gas emissions, and to inform the reader by showing the whole picture in this way. At the same time, it is possible to include successful examples of climate adaptation in cities, to explain what can be done and why.

How do you see the current situation of climate journalism in Turkey? How would you evaluate its impact on public opinion? (The readership and the potential of this audience to act, to contribute to advocacy activities, etc.)

Attentive, informed and careful climate reporting is currently mostly limited to alternative media outlets that are struggling with capacity and resources. This, unfortunately, causes the news created to be limited to a certain audience, no matter how valuable and original it is.

Many media outlets sometimes think that ecology and climate news will not attract many readers, and sometimes they ignore these issues due to a lack of personal attention. However, the problems related to the planet we live in are everyone’s problems. And we know how much people are interested in these issues and the potential to act, as in the examples of mucilage, Kazdağları and İkizdere.

‘There are few climate broadcasting organizations in Turkey.’

Is there a network of content creators (at the national and local level) on climate and environmental issues in Turkey? If not, why? Do you think such a network should exist?

There is currently no such network in Turkey. We are part of an international network called Covering Climate Now. There are also media organizations from Turkey here.

The reason for the lack in Turkey is that there are very few climate broadcasters. When there are few organizations, we are somehow aware of each other and the work we do. However, we maintain this relationship and solidarity in more informal ways, not institutionally.

At the same time, we support each other by collaborating with many platforms that broadcast in this field. For example, we are starting podcast production with Gezegen 24. Two people from our team and one from the Gezegen team will jointly start producing weekly podcasts. We think that such gatherings are much more valuable for everyone.

Do you have cooperation and communication activities with NGOs (global, national and local) working in the field of climate? To what extent do you involve civil society in the formation of your editorial policy and content?

Global, national and local NGOs are among our primary news sources. We are in direct communication both to report on their work and to benefit from their information while making news on the subjects they are related to.

Do you think that Western-based and big-city-oriented content is created in climate news? Is it difficult to create climate-related content from the East and the small cities of Anatolia and present it to the reader’s attention?

Of course, news from sources such as Reuters, The Guardian, New York Times, Climate Home News, Grist, Ecologist is a source of information for us. This causes most of the news to be from Northern countries. In Turkey, on the other hand, the dominance of media outlets in metropolitan cities such as Ankara and İstanbul cause relatively less coverage of local news.

We are trying to focus on local news in order to change this. Although we have many communication tools, it is not always easy to provide this because our mobility is limited (especially during the pandemic). For this reason, when we work with external reporters, we prefer to work with local reporters.

Which institutions and individuals do you follow who create content in the field of climate in Turkey?

There are, of course, many valuable names for individuals. There are academics and activists from many fields such as meteorology, water, climate science, food, art, sea, lake, forest, etc. However, since the list is quite crowded, listing these names would be unfair to many forgotten names here, so it’s better if we skip this part.

‘Generation Z Has High Interest and Awareness to the Climate Crisis’

One branch of the term of climate injustice is intergenerational injustice. So, the current younger generation and the unborn will face the consequences of our and our predecessors’ actions and inactions. And much more heavily. As such, younger generations may rightfully be much more reactive to the climate issue and the insensitivity shown by adults to this issue.

We think that generation Z has a high level of interest and awareness of the climate crisis. Many survey studies confirm this information. Many young people, both in Turkey and around the world, are going on climate strikes for this reason. ‘How do you expect us to learn science when you don’t pay attention to what science says?’ they ask. We can observe this awareness and interest directly in the columns we dedicate to climate activists from Generation Z.