Request for Recusation in ‘Kaaba Exhibition’ at Boğaziçi University Lawsuit 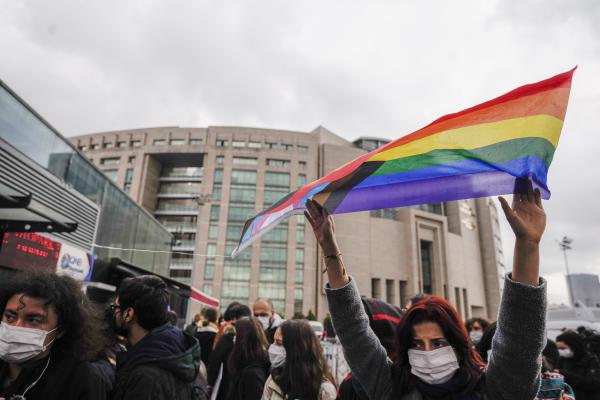 The second hearing of seven students, who were on trial on the grounds that they hung ‘Kaaba image with Shahmaran figure and LGBTI+ flag’ in protests at Boğaziçi University, was held. Claiming that the court judge guided witnesses who are against the students, lawyers of the students requested a recusation.

The lawsuit against the seven students was brought by reason of an image that was displayed in the protests against Prof. Dr. Melih Bulu’s appointment as a rector to Boğaziçi University, and the second hearing was held. Students are on trial for ‘inciting the population to hatred and hostility’ for hanging a ‘Kaaba image with Shahmaran figure and LGBTI+ flag.’

In response to the call for support, Kağıthane Governorship announced that any kind of activities and protests at Çağlayan Courthouse and its surroundings were banned.

The hearing, which was expected to be held at İstanbul 21st Criminal Court of First Instance, was held at one of the largest courtrooms of the courthouse, 27th High Criminal Court.

Except for Eda Kalafat, all the students who stood trial were present. A large number of riot police and private security were deployed in the corridor where the courtroom is located. The hearing started an hour and a half later than announced. The delay caused tension from time to time between those waiting at the barriers and the private security.

In the hearing, it was observed that the judge who performed their duty in the first hearing had changed.

Witness: ‘I did not witness the picture being hung’

At the hearing, Alparslan Çepni, who testified against the students and is one of the heads of security in the university, was heard. Çepni said that upon news about the image at the exhibition that was published on Yeni Şafak newspaper on January 29, the heads of security decided to ‘interfere with such images.’ He stated ‘I was told that this kind of picture was hung. There were other complaints about the picture, saying that it was an insult to religion of Islam. We warned the students, they did not remove it and said, “There is no such thing here, we added the explanation below, it has nothing to do with Islamic values.” We heard that the picture went missing around 17.00. The three friends took the statement down. They told me for the statement to be processed, it needed the signature of someone from the security, so I signed it.’

Upon the judge’s question, the witness security chief stated that he did not see the moment the picture was hung.

Regarding to hanging of the picture, Levent Pişkin, one of the students’ lawyers, showed the witness the signature on the statement in which the accused students’ name was also included. The witness stated that the signature was his own. Pişkin asked ‘Are you not aware that signing a statement about an incident you did not see is a crime? Did you witness who hung the picture?’ and Çepni answered that he did not witness the incident.

Witness: ‘The picture disturbed me’

Another private security guard, witness Faruk K. Said ‘I was there to check out the posters upon instruction. The Kaaba photograph had LGBT banners and Shahmaran figures all around.’ He stated that he asked the students to remove the picture on the grounds that it was ‘against Islam.’

Lawyer Pişkin asked ‘On what basis, depending on which duty and law you thought that the picture was against Islam and constituted a crime? Why did you feel the need to warn them?’ and the witness answered:

‘He who lives in the religion of Islam knows these things. LGBT and Shahmaran banners on the Kaaba photo are not acceptable to me. I say this as a Muslim, and I do not approve of this. I was disturbed, so I warned them. I did not say that I was disturbed, I warned them by saying it was wrong.’

Lawyer Özge Tokgöz stated that even though the witness expressed in his statement today that he saw the two students hanging the picture, there was no such statement in his statement at the police office. The lawyer said ‘It bothers me that he comes here with a memorized statement and testifies as if he is a party. I do not accept memorized statements.’ The lawyer asked, ‘Based on what right, what authority did he say, “Remove the picture”?’ Prosecutor and the judge objected to the question and intervened.

The judge interrupted another lawyer asking a question about witness’ look to them and responded to the lawyers, raising his voice, and saying, ‘Are we at war?’

The lawyers got interrupted by court judge frequently as they asked questions. Therefore, defendant lawyers claimed that the court judge guided the witness and requested a recusation.

The prosecutor asserted that this request was made to prolong the case and asked for rejection of the request.

It was decided for the case to be sent to high criminal court. The hearing was adjourned to November 17.

The first hearing for the case was held on March 17, 2021. Seven students were accused of ‘inciting the population to hatred and hostility’, allegedly, after they hung a ‘Kaaba image with Shahmaran figure and LGBTI+ flag’ during the protests at Boğaziçi University. On January 30, the students Doğu Demirtaş and Selahattin Can Uğuzeş were arrested within the scope of investigation.

Hazar Kolancalı, Sena Nur Baş, Selahattin Can Uğuzeş, Mahmut Can Bodrumlu, Eda Kalafat, Doğu Demirtaş and Rümeysa Özüyağlı are on trial within the scope of the case. A prison sentence of one to three years is requested each of the students.

At the hearing on March 17, Demirtaş and Cam Uğuzeş were released. The judicial control decision of ‘not leaving the residence’, also known as house arrest, was also lifted at the first hearing. 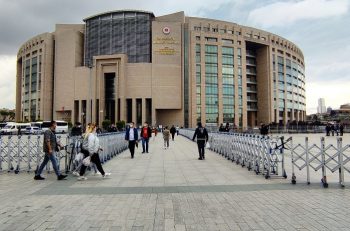