How to Prosecute a Journalist 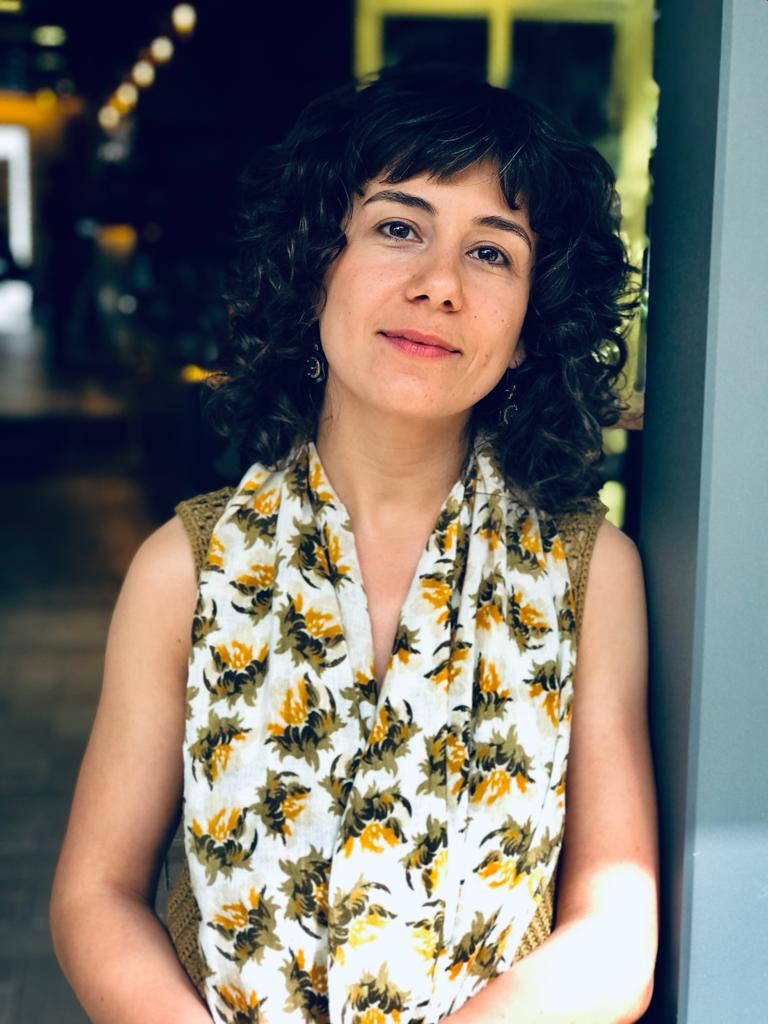 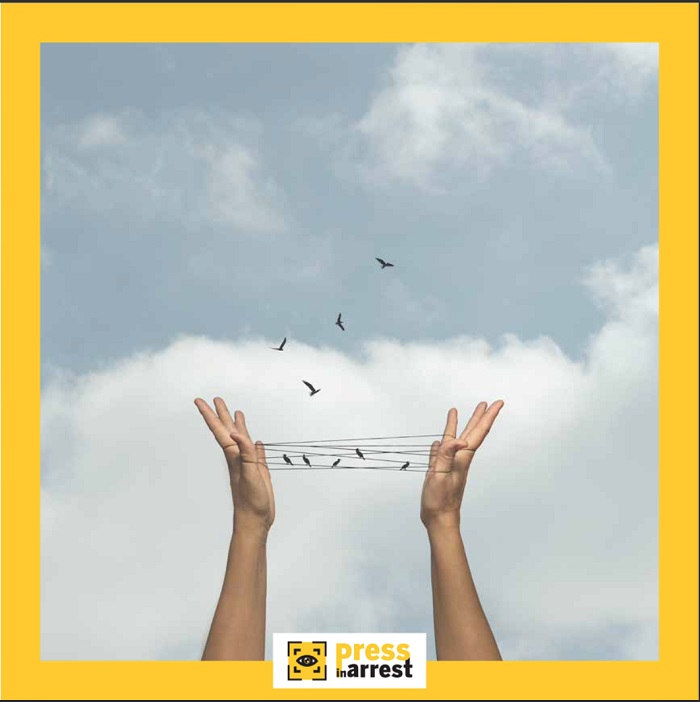 What constitutes an offense can be defined and re-defined as needed, right? Times and perceptions change, so does the law, hence rights and freedoms, too. I mean like the right to freedom of expression and press?!

At times I thought, as a journalist my responsibility is doing my job to the best of my abilities and responsibilities. This was my way of challenging the injustices and atrocities I bore witness to. Now that I am older and wiser (?!), I know, I am allowed to do journalism to the extent of the boundaries and possibilities set before me. And in the past 15 years, that boundary feels like the fences of a garden of a house in a middle class gated-community site. The rest is a constant fight and struggle to regain the lost spheres and push the narrowing barriers against all odds. Oh, to make it clear, I am a journalist in Turkey – not that the rest of the world offers a dream prospect. Since Turkey has been infamous for being one of the top jailers of journalists in the world, I think you got the idea. 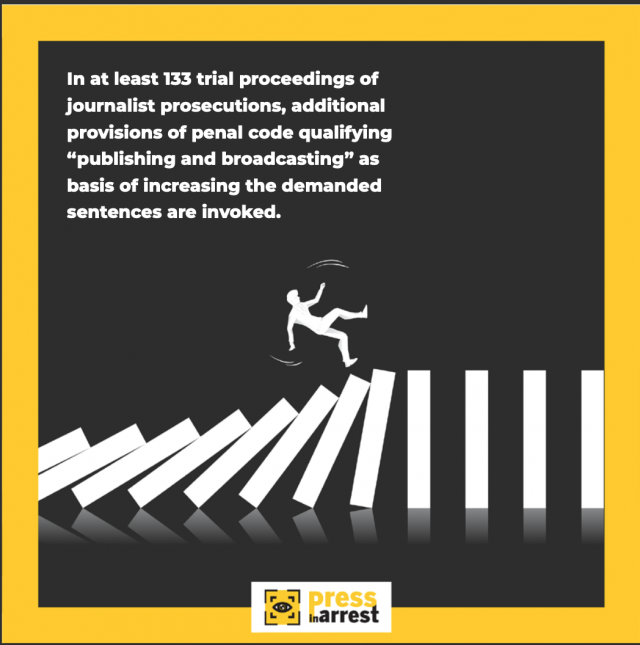 Ok, I am not writing this to whine about the doom and gloom journalism has suffered. Rather, I wanna play along the lines and draw a 101 guide on how to punish journalism.

In today’s world that is gone off course, let’s define “comparing a president to Darth Vader” as an insult crime punishable with prison sentence up to four years, can we not? Even better, let’s rule that if this “crime” is committed publicly, the sentence prescribed shall be heavier. When I say publicly, I mean through press (such as publishing a report) or any means of media (like posting a tweet.) Well, if a journalist would dare to call the president as being like Darth Vader, let’s put her/him in prison. How odd would this be?

For those youngsters, who does not know Darth Vader, please see Star Wars. [PS. It is a movie.]

Do you think this can be real?

Back to judging Darth Vader comparison and a break to the dark humour. I wished to write ‘there should be a limit to this nonsense,’ but I cannot. Because the main topic of this text is a report, titled Anatomy of Journalist Prosecutions in Turkey, we recently published as Press in Arrest Database on Prosecuted Journalists. On its page 69, you will find that a journalist, namely Ahmet Altan was, in fact, put to trial under the Artice 299 of the Turkish Penal Code, for comparing Tayyip Erdogan, the president of Turkey, to Darth Vader and sentenced to almost three years in prison.

It does feel like the usual chit chat about how in today’s world, dystopias such as George Orwel’s novel ‘1984’ has become reality. Or rather, how the incredible incidents happening in sci-fi productions become real, i.e. the pandemic we have endured in the past year.

The two-and-a-half years we worked to monitor and document journalist trials in Turkey to gather data and record the symptoms of systemic dysfunctions that gave way to prosecution of 356 journalists in 240 cases, there happened so many moments that felt “This cannot be real!”

The Report at a Glance

A report identifying how laws and rules can be bent

In this sense, Anatomy of Journalist Prosecutions in Turkey report reads like a guide on how to bend rules, laws, conventions and standards as well as rights and freedoms to prosecute journalists in Turkey. Yet, we did not name it so, out of respect to those hundreds of journalists detained, arrested, judged, condemned to indignation, some even tortured, and at least 39 of whom are still in prison. We thought, we can set a limit to this dark humour, since the political power in Turkey, and the judicial system it has deemed subservient, obviously will not voluntarily!

“Turkey is a State Party to both the European Convention on Human Rights (ECHR) and the International Covenant on Civil and Political Rights (ICCPR), which guarantee the right to freedom of expression. Indeed, Turkey’s own Constitution provides for the same.”

This is the very first sentene of the report. Yet, there we are, working to monitor and document a political and legal practice that has, for over a decade, broke and violated almost every regulation and/or standard pertaining to these legislations. 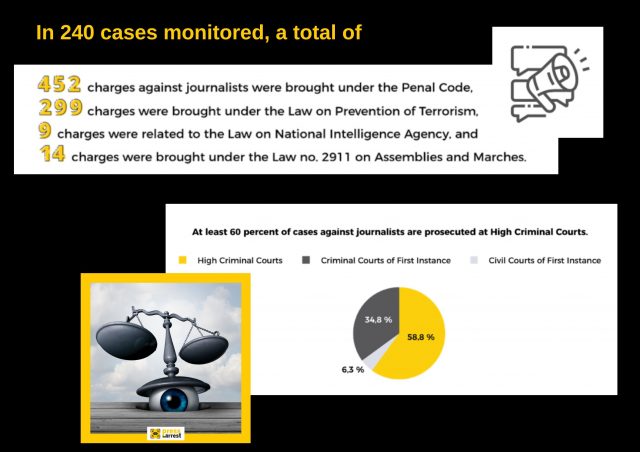 In the report, you will find lots of cold data, statistics and numerous analysis on the judicial character of these journalist trials. But you’ll also find that these journalists are real human beings, who were doing their job and using their rights to freedom of opinion, expression and press. That is if these laws and rights can still be deemed existent.

Unfortunately, you will also find many more journalistic practices, such as posting a funny comment on Twitter, concerning a TV show featuring Ertugrul Gazi, a 13th century Ottoman Turkish leader, that was proscribed and led to detentions or prosecutions of journalists.

Examples of cases to practice

The content that resembles the report to a guide on how to prosecute a journalist comes with its ability in identifying the paradigms of legal practice, namely the application of legal provisions invoked in press cases.

Let’s give you a glance of what kind of laws could be utilized to stifle freedom of expression and press, the report details expressions or activities of prosecuted journalists and the charges brought under the Turkish Penal Code or even better the infamous Law on Prevention of Terrorism, articles of which were invoked 299 times in 240 cases against journalists.

can be defined as activities constituting crimes, prescribed under anti-terror laws. 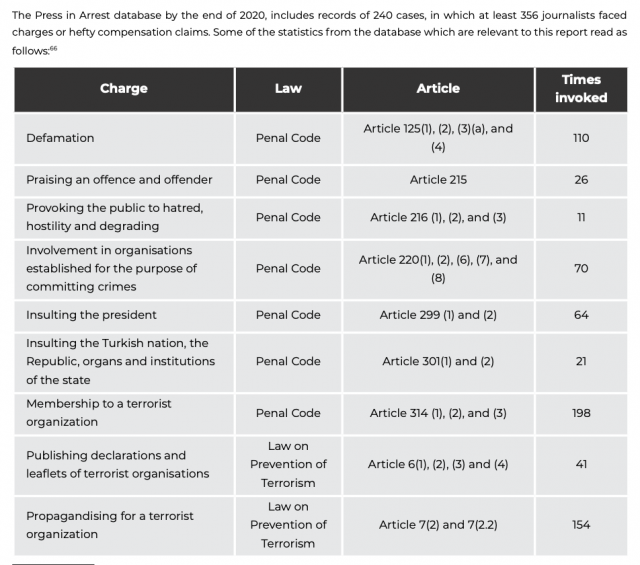 This means, if there is an anonymous or otherwise leaks pertaining to high-ranking government actors, a journalist should refrain from investigating or even worse, reporting on this information. The message of this prosecution is clear: play the three monkeys and keep off such public scrutiny of the wrongdoings of government actors or you will be accused of “terrorism” and sentenced to prison up to 11 years.

Oh, and you will be kept in pre-trial detention for five months, awaiting an indictment to learn about your charges. If you cannot believe that this is possible, please check this link to the case dubbed as “Redhack case” in Turkey.

Here is another guide to charge journalists. This one is to use the Article 301 of the penal code “insulting the Turkish nation, the Republic, organs, and institutions of the state.”

are some examples of journalistic activities that can be punished under Article 301.

Any excuse can be defined and re-defined to deem these activities as crimes of inciting hatred and violence among the society or degrading a sacred notion within the community, etc. These crimes are punishable with up to two years in prison.

If you think this cannot be real click here to read one of its best examples in the case against journalists Duygu Guvenc and Alican Uludag.

Better now, just put them on trial with some time in pre-trial detention and linger the judicial proceedings. Viola!

All the journalists in your country will be stifled and self-censoring. Just make a good example by vilifying a few of them and you have your results: an un-free media by the hands of an un-independent judiciary.

Well, if this is not a dystopia coming real is not, what is? So, if you are seeking to re-define the crimes of expression and journalism, please feel free to access this report by clicking on its title here: Press in Arrest: Anatomy of Journalist Prosecutions in Turkey.