‘Civil Society is Waging a Struggle of Survival’ 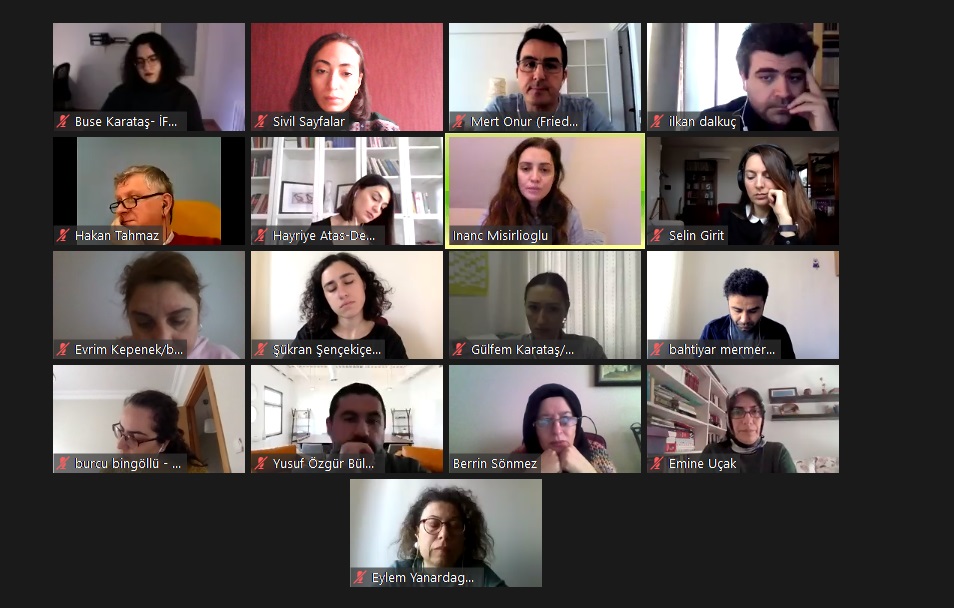 In the face of mounting pressure over civil society organisations through a Bill on Preventing the Financing of the Proliferation of Weapons of Mass Destruction that enacted provisions further curbing independence of associations, many NGOs are seeking ways of collaboration, resistance, impact and existence.

A controversial law on the prevention of the financing of the proliferation of weapons of mass destruction (WMDs), enacted by a parliament vote on 26 Dec 2020, contains some additional provisions that allow the government to arbitrarily suspend the activities of the non-governmental organizations. Ahead of the approval of this law, Civil Pages organized an online workshop titled “Liberties, the Media and Civic Space” on December 24, 2020 with the support of the European Endowment for Democracy.

About 20 civil society  representatives and journalists participated in the workshop. The participants agreed that the government pressure against the civil society  continues to mount through legal amendments concerning associations. They argued that resistance can be possible only through the involvement and cooperation of civic actors from different sectors of society.

In the first part of the meeting, the participants expressed their opinions regarding the “Analysis of the Current Situation of Liberties, the Media, Civic Space” and pointed to rights violations and NGOs’ struggle for survival.

Providing an assessment of the current situation, Hakan Tahmaz of Peace Foundation pointed to their report examining where the civil society succeeded and failed during the peace process, underlined the structural problems of civil society, and observed that the NGOs are currently undergoing a kind of instrumentalization. Tahmaz indicated that although certain NGOs are comfortable working under the auspices of the government, NGOs advocating human rights have started to face immense pressure, especially since 2018-2019. Stating that lack of solidarity and information sharing among NGOs are crucial shortcomings, Tahmaz pointed to the need to strengthen the ties between the media, academy, and civil society.

Self-criticism and Finding a Common Ground

Berrin Sönmez of Eşik Women For Equality Platform emphasized that although NGOs have provided ample support to the petition against the bill in question, they could not create an impact on the government. She also argued that it is necessary for civil society actors to establish close relations with the media and opposition. Sönmez said that the women’s movement today represents the broadest opposition in Turkey, and that this has been possible only because women from different ideas and beliefs presented their heartfelt self-criticisms and reached a common ground. Sönmez emphasized that, given the current conditions, it is essential for civil society to “expect little, work very hard, and continue to work with perseverance”.

Buse Karataş of Freedom of Expression Association indicated that their association worked through legal means to prevent the muzzling of civil society and independent media, and that under the current conditions, the civil society is waging a struggle of survival. Indicating that pressures against civil society have become increasingly “arbitrary and unpredictable” in the last 2-3 years, Karataş stated that even ordinary citizens faced multiple lawsuits for their social media posts and were handed down lengthy prison sentences. She added that access to various news web sites is frequently blocked by the government, that there is mounting pressure on dissident media outlets, and that they register and publicize these rights violations through the website engelliweb.

In the second part of the meeting, the participants shared their suggestions on “Collaboration and Struggle Against Unlawfulness”. General Director of Checks and Balances Network (DDA), Hayriye Ataş stated that, since their inception as a network of around 290 NGOs, they had the opportunity to monitor the progress in civil society. Although in the beginning they were able to establish close ties with every political party, since the state of emergency, NGOs have been criminalized and many of them have been shuttered, in turn limiting the leeway of DDA. Indicating that the bill presented to the Parliament is suggestive of what is to come in the near future, Ataş underlined that the bill also showed how the government associates terrorism and civil society. Stating that the civil society actors should forge their destiny together by discussing and creating a joint road map, Ataş said, “We can and should talk about how we can join forces in the shrinking political arena.” She also indicated that it is very positive for NGOs to create their own media channels by launching their YouTube accounts during the pandemic.

Burcu Bingöllü of Memory Center stated that, in the last five years the main agenda item of the Human Rights Advocates Network, of which she is a member, has been human rights NGOs’ efforts to maintain their existence. Bingöllü indicated that the Human Rights Advocates Network had a difficult time in finding media outlets to cover the annual report they issued last week, pointing to the need for interaction between civil society actors and the media. Bingöllü stated that, at the Network, they met with journalists and discussed how to establish a fruitful relationship. In this respect, Bingöllü stated that a network ought to be forged to strengthen the media relations of well-established human rights institutions such as TİHV and İHD, as well as other rights advocates.

General Manager of Rights Initiative Association, M. Arif Koçer took the floor in the meeting and said, “We are going through interesting times; the oppressive regime is  showing its teeth”. Koçer stated that under such conditions, NGOs should stand closer and continue the struggle jointly. Adding that the bill submitted to the Parliament points to a drift towards an utterly arbitrary regime, Koçer said that he is confident that things cannot continue in this way. He argued that this period will come to an end as was the case with all periods of oppression throughout history, underscoring that the solution can only come from joint struggle.

Finally, İlkan Dalkuç of Daktilo 1984 took the floor and said, to see the bright side of the current situation, the population has no trust in mainstream media outlets, thus forcing the government to instrumentalize law as its stick. Indicating that he expects the repression to intensify, Dalkuç said that increased online access could trigger more repression, and therefore “offline publishing” could become a solution.