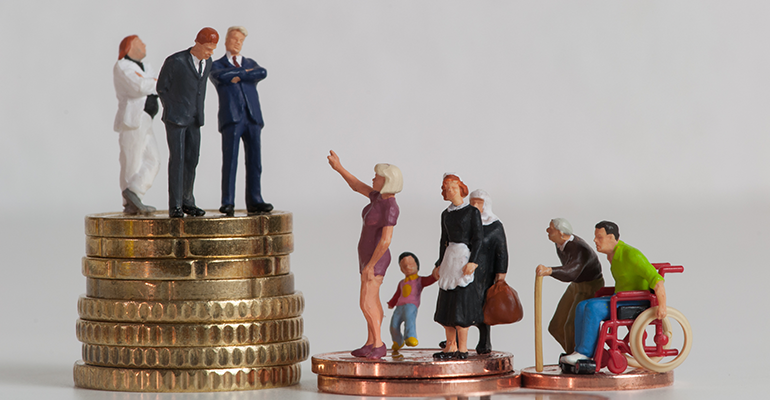 While Evren Balta from Hüsnü Özyeğin University emphasizes that social inequality and vulnerabilities are at the forefront among the deaths caused by the virus, Lütfi Sunar from Istanbul Medeniyet University underlines that the process should be evaluated with special care for the poor and precarious parts of the society. Academician Cavidan Soykan states that “class discriminations” became visible from protection to isolation processes with the epidemic, while Ertan Karabıyık from Development Workshop emphasizes that the epidemic makes inequalities visible like “a litmus paper”.

In the corona analysis published by the Social Structure Research Program with the title of sociology for life (‘hayat için sosyoloji’I), Lütfi Sunar brings forward the issue of inequalities (‘eşitsizlikler’, which is the first threshold in combating the epidemic.

Stating that people do not have equal opportunities in terms of protecting their health, staying at home, isolation, treatment or rehabilitation because of socioeconomic reasons and being biologically equally vulnerable or not being immune to diseases, Sunar says: “Although measures that were taken in the first stage such as staying at home may seem to be meaningful especially for the middle class with fixed incomes and job guarantees, the epidemic seems to cause a challenge for many tradesmen, cause workers to lost their jobs and cause workers who work in irregular jobs would completely be deprived of their incomes. As socioeconomic inequalities seriously affect access to health and the likelihood of catching the disease for the different segments of the society, this cycle will increase exponentially during the epidemic.” According to Sunar, in order to overcome the problem, it is necessary to be aware of the origins and the sources of inequalities and to be aware that inequalities create more comprehensive problems than the epidemic itself.

Evren Balta, who pointed out that the spread of the epidemic is higher in large cities with dense settlements when looking at the dynamics of the virus, says: “Not all cities are equal. In places where people have to leave their houses to work, in areas where workers live and where the poor population is dense, we see an increase in the epidemic.” Emphasizing that these parts of the society have lower immune systems in terms of living and nutrition conditions, Balta says: “The biggest dynamic of the impact of the virus is shaped by class inequalities. It is also possible to say that urban poverty overlaps with race or immigration in some places. For example, the main reason for the number of black people among those who died from the virus in the US is that poverty is united with race, and that black people are poorer.” Balta emphasizes that the virus potentially affects everyone, but social inequalities and vulnerabilities are more pronounced when looking at the areas where death rates and epidemic increase rates are high.

“Health Measures Cover Not Everybody But The Healthy.”

Cavidan Soykan, who stated that even the access to the materials required for protection from the virus is not equal, emphasizes that the possibility of staying at home is not equal for everyone and says: “Those who earn without going out, middle-upper class who can work from home, white collar people who are allowed to work from home… Those who have the opportunity to shop online in various ways without leaving their homes, in other words, those who have devices with internet that allow using this opportunity… It has not been discussed for vain that internet should be recognized as a human right, it was just for today. To access the right to education, even the simplest television is needed for children who go to public schools. We are faced with a system that assumes that everyone has these opportunities at home. But in fact, it is not possible to stay at home for those who have to work to sustain everyday life. Healthcare workers are at the forefront of this issue, and unfortunately we suffered their losses. The first ones that come to my mind are the courier company workers, grocery store workers, cleaning workers, municipal workers, especially drivers and those who have to work in the factories that continue production without interruption, and worst of all tens of thousands of people who work in the service sector or that were sent off for unpaid leave; there are thousands of them in front of us…”

Reminding that the immune system should be strong in protecting from the epidemic and that adequate, balanced nutrition and sleeping well are recommended, Soykan says: “It is impossible for a person with a minimum wage and their family to have a sufficient and balanced diet in Turkey’s conditions. First of all, reaching drug-free, hormone-free and healthy food requires a serious effort. I have been trying to get healthy fruits and vegetables from the producer for some time to overcome my chronic illness, but this is not very sustainable for a middle-class family. It would not be wrong to say that I spend all the money I earn on food. This is the socio-economic dimension of the problem. There are also elderly people or people with disabilities and chronic health problems who are not included in the precautions taken for healthy ones and who are humiliated with the warnings. All public service ads are made for healthy people. So what should the ones with chronic illnesses do? Or what about the elderly who were exposed to bullying in the first days? Shall we turn a deaf ear to this discriminatory language and discourse as they state we would die if we catch the virus? The epidemic has clearly demonstrated that the currently implemented health measures only include the healthy ones, but not everyone.”

Soykan noted that there are inequalities on getting protected against the virus in the field of isolation, access to treatment and rehabilitation and said: “The fact that the tests being paid in access to treatment has already created a very clear class discrimination. With the slightest suspicion, one was able to go and pay for the test. Those who had to work on the streets every day should have been tested first and positive cases should have been on paid leave. Now we hear that there are positive cases among various workplaces, factories, from refugees on administrative detention and from prison staff. These could have been prevented with good planning.”

Emphasizing that not only the coronavirus epidemic but also other disasters do not affect everyone equally, Ertan Karabıyık reminds that the same situation has been experienced in flood disaster in Adana in the past months. Karabıyık, who stated that people living in tents in open fields during the flood were more affected says: “There are two main distinctions about the epidemic at first. Those who can stay at home and those who cannot. Those who have not lost their jobs, those who have money, and those who have savings were not affected much. But those who lost their jobs and lost their income when they stayed at home were really affected. When we look at those who cannot stay at home, we see that their situation is more difficult. Therefore, the story that we are on the same ship and the discourse that the outbreak equalized all of us are unfortunately not valid.”

Karabıyık emphasized that the epidemic impoverished the lower parts of the society and the poor even more and said: “The small retailer who had to close their workplaces were very affected. The measures taken by the government did not go beyond delaying debts. That aid of 1000 TL to the most vulnerable sections of the society has also not been enough. Another issue is that these people cannot be resistant to the virus because they cannot eat healthily. This causes an increased health risk in case of an outbreak. We can easily see such symptoms among Romani communities and among seasonal nonpermanent workers.”

Would The Epidemic Change The Perception Towards The Unequal?

On the other hand, when the coronavirus outbreak revealed the importance of food safety and access to food, it made the seasonal and migrant workers working in the agricultural sector more visible. Cavidan Soykan, whom we asked about Romanian agricultural workers being welcomed as “heroes” in England last week, interpreted the need for the efforts of undesired Eastern European immigrant workers before the epidemic as tragicomic and said: “The same thing is also valid for Germany and Belgium. We call these jobs 3D (dirty, dangerous, difficult). Since these are always done by immigrants, we argue that there are no jobs being stolen by foreigners from the citizens. Perhaps the only good thing about the epidemic was that it made it clear.”

Stating that there are videos that draw attention to discrimination in England on this subject, Soykan said: “It is understood that immigrants are at the forefront during this epidemic, and how precious their labor is in health, service sector and agriculture. Such similar negative discourses and actions will have some effect on preventing foreign and immigrant hostility and racism, but I think that the political discourse, politics and politicians must change for a change in the long run. As long as this far-right politics and discourse continues to be voted by voters, I think the solution to this problem will be very difficult. Because right-wing politics will always continue to play upon nationalism.”

Ertan Karabıyık also stated that the importance of seasonal agricultural workers and migrant workers were put on the forefront with the epidemic as they play an important role and said that there will be two developments after this epidemic. Karabıyık said: “The first one is to conduct studies for technologies that will be used instead of people in the field of agriculture. The living standards of agricultural workers will be the subject of debate. We think that better standards must be brought to the agenda.”

Karabıyık who noted that the epidemic functions as a litmus paper which indicates the social segments with most inequalities, said that another issue that is noticed is the fact that the rights and working conditions of the disadvantaged groups can be worked upon so quickly when needed. Karabıyık also emphasizes that the debates on workers’ legal guarantees will increase after the epidemic.