The Voice Of Women Of Pendik: Esenyalı Women’s Solidarity Association 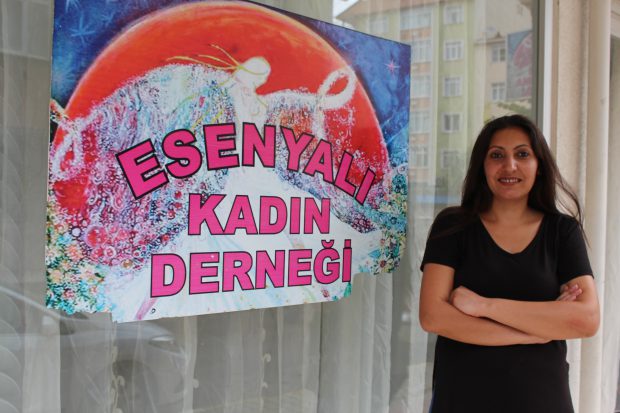 We talked with the President of the Esenyalı Women's Association Adile Doğan about the activities of the association that they built together with women from the neighborhood, the path the association has taken so far, its impact on women and how it has transformed the neighborhood. Zeynep Yılmaz who works heartily for solutions as well as the detection of problems had also appeared as a guest in our conversation.

Esenyalı neighborhood in Pendik is an area where workers, laborers and poor people live. In this neighborhood, poverty, violence and unemployment fall to the share of women among the inequality. Five years ago, an association was established in this neighborhood to create a demand and solution to all the problems women face: Esenyalı Women’s Solidarity Association.

Saying that the association was founded 5 years ago with the initiative of 300 women, Adile Doğan drew attention to the needs of the association: “We still have a lot of local problems here. We’ve kept this association by coming together with about 300 women and organizing forums. Since that day, we continue to operate within. We founded this association both to solve our local problems and to create an area where women can come together and solve theirs and where their troubles and demands would become common. Later, we held social activities and women’s meetings. As we were doing these things, we have seen various deficiencies emerge. We saw that violence and child abuse are very common in our neighborhood. A large number of women who were subjected to violence and whose children were abused began to come here. When these women had had access to this association, we quickly acted with solidarity on this issue as well as trying to fight it.”

Explaining that they carry out various activities by organizing campaigns and mass calls, Doğan also states that they hold social events, workshops and seminars: “We organized collective seminars on law, women’s health, psychology and women’s rights. As the association has progressed and been brought into existence, we saw many volunteer women taking sides with us. Together with the women who came together with us among different fields and worked and struggled with us, we tried to see how to deal with these matters and how to struggle with them.”

‘Our Primary Objective Is Equality’

Doğan continues as: “We try to perceptively solve the problems of women as well as engaging them in the struggle and ensure that they look to the future more confidently.” and emphasizes a substantial goal: “When we look at the general politics of Turkey, we know that women do not have equal rights and that their existing rights are taken away. So our main goal is equality and our demand for equality to be met. But of course this is not enough, this goal appears as an outcome. Prior to that, there is no kindergarten in our neighborhood where women would send their children for free. Municipalities always boast of these kindergartens, however there are none in laboring districts like Esenyalı. That is why women are disconnected from production. Elderly and patient care is always on the shoulders of women. Women are left to the streets when they want a divorce, they cannot even benefit from the right to alimony, so we have a shelter demand, but this shelter would not be like the common ones, not like guesthouses where women cannot get support. Our demand is for places where women would really be supported and would get stronger when they return to life. We also have a demand for nursing homes. There are no safe and sufficient children’s playgrounds. We organize various signature campaigns and studies for these. We try to include women from our neighborhood to events on important dates such as 25th of November, 8th of March and May the 1st.”

‘We’ve Made This Area Visible’

Doğan lists how they caused changes in the neighborhood as follows: “For example, this has become the place where women took their first steps against their own problems. It is also like that for workwomen. For example, they want to unionize but they do not know how to do this, they also come here. Women who are victims of violence come here as well, along with women who want to do something. We see the reflections of our various activities on women’s homes and lives. For example, the violence somehow decreases in their lives. They start to believe that they are able to work. We see the perspective of the woman who once was a stranger to her own labor until yesterday change here.”

Doğan stated that they had applied to social services and municipalities as a result of the cases that came to them many times before, but they did not find a response, but this has changed over time: ‘We’ve made this area visible.’ Stating that they also collaborate with other women’s organizations, Doğan adds: “We try to make the voice of women who try to make their voice heard to be heard. We have to find faster solutions, yes, we have a goal, we want to change something about the country’s issues on women, but when changing, we need to unite with women’s concrete demands and to be with solidarity with women. Because we have to solve the problem of the woman who has been kicked out of her home and who needs a house. In this sense, we started to act together with social services.”

‘Poverty Cannot Be Solved With Aid”

Stating that the application for violence and child abuse cases they have received up to now is over 800, Doğan said, “The violence deepened by poverty is more here.”

Doğan, whom we asked about their aid activities said: “In fact, until three years ago, we were not at a point where we could solve women’s problems on aid. But as the solidarity spirit of women developed, clothes, materials and supplies began to reach us. We deliver them to those with urgent demands. Although we do this with the idea of solidarity, it turns into aid. But we have to do this. For example, a woman recently had to give birth to her baby on the street. Sometimes we need to touch and heal the wound in a concrete way, but we know that poverty will not be solved or ended by aid. The only thing that can solve poverty is equality, humanitarian wages, and most importantly, women who are left alone in life to be supported in social life. We support them with aid, but we are aware that poverty cannot be solved with it.”

Last statements of Adile Doğan, who calls on women to fight together with the association are as follows: “We increase solidarity by strengthening it more each year. We can do this as women shoulder us. We are calling for more women to act in unison with us to reach more women.”

Zeynep Yılmaz, one of the members of the association who also gives creative drama lessons to the children of the neighborhood, has been participating in the activities of the association for 4 years. Yılmaz explains that she gives these classes to socialize the children f the neighborhood and develop relationships between their age groups. Explaining that lessons such as English and Math are given besides creative drama lessons, Yılmaz says: “It is very useful to have such an association here. It plays a very important role in giving women something about their own lives. I started to go to the association in order to support it as a woman and to acquire something about life and now I am giving drama lessons. Our other female members are also working as much as they can. I think that women get to know themselves here and that they find answers to questions such as “what are we doing, what is our place in this society?”. In this sense, it also contributes a lot to me.” Stating that Esenyalı Women’s Solidarity Association will continue its existence with determination, Yılmaz calls for women to show solidarity and togetherness.