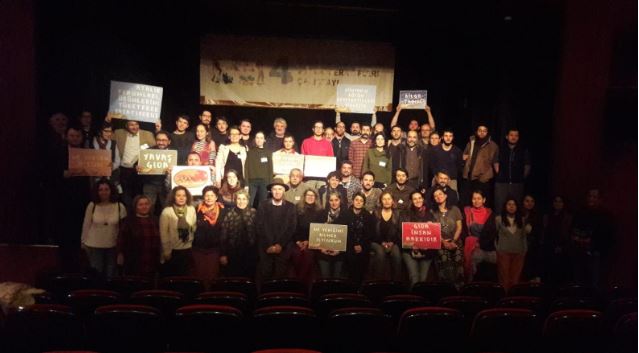 The fourth of the Food Communities and Cooperatives workshop was held at Kadıköy Barış Manço Cultural Center on December 29, 2019. The workshop brought together communities that discuss all aspects of food, consider it and generate new ideas.

Nikos Mysirlis from Koukouli Cooperative in Thessaloniki was invited to the workshop to convey his experiences. In his speech, Mysirlis stated that the Koukouli Cooperative is a cooperative founded by people who were left unemployed after the economic crisis in Greece and that included 20 people living in Thessaloniki as well as 80 producers. He said that the cooperative sold only the products produced by its own partners, and with this approach, the turnover they obtained from their two shops in Thessaloniki two years ago had reached 1 million Euros. He said that all partners were unemployed university graduates and that they carried out a work entirely based on trust.

Climate Crisis and Food Supply had become one of the attention grabbing sessions of the workshop. In the session moderated by Özdeş Özbay, one of the Sıfır Gelecek volunteers and presented by again one of the Sıfır Gelecek volunteers and Yeryüzü Cooperative partners Ayşe Özden, it was emphasized that agricultural activities were negatively affected by the climate crisis, and that industrial agriculture and current food system had been among the main factors that triggered the climate crisis. It was said that the impact of industrial agriculture and global food system on climate crisis has reached around 40-50% because of the reasons such as intensive mechanization brought by industrial agriculture, fossil-based fuels used in the distribution of food, shifting of production inputs to chemical drugs and synthetic fertilizers, etc. It was stated that agriculture had become an energy consumer due to all these reasons. The motto of La Via Campasina which is “Small-scale farmers are cooling the world.” was described as a sentence that summarizes the solution of the problem. Apart from this, the results of the research titled “Can Organic Agriculture Feed Turkey?” by Yonca Demir and Bulut Aslan was discussed. In the study of these two academicians, the conclusion was remarked that the 54% of the tilled lands in Turkey would be sufficient to feed the whole country, when an annual menu that includes the most consumed herbal products which provide enough energy and which is balanced in terms of fat, protein and carbohydrates is prepared. Apart from this vegan menu, academicians have reached the conclusion that 63 percent of the tilled lands in Turkey would be sufficient when the production of products that will feed animals with omnivore nutrition are taken into consideration. It was said that it would only be possible with a holistic approach for organic agriculture to be able to offer a solution to the crisis in the food production system. It was also pointed out that the food loss that takes place from production to distribution cannot be considered separately from the process.

Other panels at the meeting addressed the issues of radical methods in food access, producers and creatives, the cooperations between local governments and food communities, participation models in food access and the role of industrial production in the climate crisis. The workshop, which brings food cooperatives from all around Turkey together every year to break the domination on food, to strengthen the access of urban communities to healthy and clean food, and to increase the solidarity between the producer and the creatives, also gathers farmers as well as producers who produce fair, local, clean and environmentally friendly products and who want to access these products at affordable prices. In the workshop, it was discussed that a need list for food communities and cooperatives could be issued, and that the producers should become more visible by making use of the opportunities brought by the digital age. These discussions were foreseen to deepen in the following years.